Spencer Gordon is a Toronto writer, the co-editor/co-founder of micro press Ferno House and the online literary journal, The Puritan, and the author of Cosmo. Cosmo is a collection of short stories, ranging from the straightforward and beautiful Jobbers (about a young boy and his love of wrestling) to the experimental Transcript: Appeal of the Sentence (a story taking place within a single sentence stretched out over several pages. Its title playing the dual role of transcribing an appeal to a court sentence as well as describing the fun, the appeal, of playing with a written sentence as it meanders seamlessly from one idea to the next). Spencer took some time to give some insight into the stories in Cosmo and if you happen to read them (which I’d recommend), read them in order! 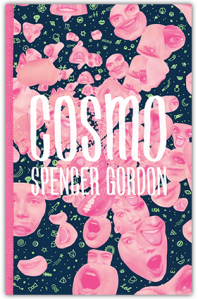 Over how long were the stories for Cosmo (2012) written? Were any written specifically for certain anthologies?

If my creaking memory serves me, I believe the first stories in Cosmo were begun in spring 2008. “This Is Not an Ending” was written with a very small chapbook (our theme: transit!) in mind. The rest weren’t meant for any particular book, anthology, or magazine, or even publication. I don’t know how to publish short stories. They were (and are) just things, texts, glowing on my screen or bleeding blue ink in my notebook. The fact that they assembled into a collection four years later was a beautiful thing.

Cosmo is the name of Matthew McConaughey’s van in the third story, “Journey to the Centre of Something.” What significance does that title hold?

In a review of the book, writer and critic Chad Pelley associated the title with the famous drink, a dance floor, outer space (as in cosmic), and the word and magazine Cosmopolitan. It’s also Matthew’s van, yes. All of those associations carry significance. It’s also my friend’s cat, my fictional son, Kramer’s first name. Many things. Sometimes titles have to vibrate in different directions, not get buttoned down. It was better than all my other title ideas, anyway. I wanted to write a book called OK!, based on the tabloid magazine of the same name, but it didn’t work out.

I like this description: “these stories read like collaborations between Stephen King and TMZ with Borges and Nabokov on the edits.” Half the stories have celebrities as protagonists. They’re a disparate cast of characters; what made you choose them?

You can thank Jeff Parker for that one. But that’s a huge question with ten different answers. For the celebrities, it’s always a cocktail of longing, desire, disgust, bafflement, estrangement, anger, empathy. My freaky little fixations, my pleasure in poking at ‘reality,’ a little transgressive thrill to take someone who’s already ubiquitous and fight back, claim him or her for yourself—for your own dark and loving ends.

Would these stories still work if it weren’t Leonard Cohen or Miss America as the protagonists?

Absolutely not. “Operation Smile” is about Crystle Stewart, “The Land of Plenty” about Leonard Cohen. They aren’t written for, and they aren’t about, other fictional people or fictional stars. You’d have to re-write them completely. Moreover, I wouldn’t have written them.

“Jobbers” was my favourite story in the collection. It’s about a poor brother and sister in a tough family environment. The boy is obsessed with wrestling and the Undertaker. Was this story at all autobiographical?

“Jobbers” is the most conventional, straight-up realist story in the bunch, and it’s often the one people enjoy the most. I sometimes wonder if I’d made them all like “Jobbers” whether Cosmo would be more popular. Probably.

Thank you, by the way! To answer your question, there are indeed autobiographical elements: I also lived in Hamilton, briefly, and I also knew people like the characters featured on Eddy’s street, and I am also very interested and hurt and captivated by professional wrestling (the WWE in particular). All stories are autobiographical, though—they all come through our cracked lenses, and they all tell our readers how we see or want to see the world.

You told me that these stories were carefully set out in a specific order. With that in mind can you talk about Frankie+Hilary+Romeo+Abigail+Helen: An Intermission? It’s the middle story and connects Frankie Munoz (Malcolm in the Middle) to Hilary Duff to Lil’ Romeo to Abigail Breslin to Helen Keller. What starts out like an extended IMDB profile of each turns into something much more profound. What were you trying to accomplish with this story?

I grew up believing that all serious short story collections were painstakingly ordered. When people tell me they read collections out of sequence, hopping around, I wince. Please read Cosmo in order, if you’re reading this! Oh please!

It’s hard for me to answer this question, though—what did I accomplish with the story, is more like it. What do you think I accomplished? Did I accomplish anything at all? My aims are secondary to your pleasure, or whatever. What I can say is that “Frankie+…” is supposed to be a nightmare intermission—rather than alleviate tedium, it’s supposed to realign our focus upon it, allow us to swish our mouths with it, give it its due. It’s about boredom, information, how things link, how we read online, how we ingest culture, how all things are evened by a cruel file. The greatest and the weakest, each of us crawling upon the earth. That’s life, right?

What would the protagonist of “Transcript: Appeal of the Sentence” (a man obsessed with Miley Cyrus) think of the current incarnation of Miley?

I’m not sure. I’d have to ask him, and we are currently estranged. I’d imagine he’d be formulating a very elaborate defense on the west coast, where he was banished. I think he’d be wounded by how much hate Miley receives. I think he’d strive to meet, and surpass, the language and rhetoric used to sell her image, brand, and message, in whatever way that language has adapted or mutated to meet new audiences and new needs. His perspective is monstrous only in proportion to the utter falsehood of PR, the banality and strangeness of those lies.

I read the Guillaume Morissette interview in 60 Watts and he said he’d be interested to see what you could do with a novel. I concur. Any plans for a novel length project? If not, what’s next for you?

Thank you! Yes, I have plans for a novel-length project. I am in the process of writing a novel, which is also a book about my life. That question about autobiography again. It is a novel, and fiction, and a memoir, and a tell-all about my experiences being courted by numerous Canadian celebrities in the summer of 2011. It’s called Leave Me Alone. That might be next for me, or more poetry (I’m always writing poetry), or something entirely different. It’s a slow process, writing a novel; I’m slower than most people, and often crippled by inadequacy.

What are your literary influences and what are you reading right now?

The literary influences thing is an impossibly long answer, and I now want to say that my influences include everything I’m reading or have read. What a tool, you’re thinking. But I can’t keep talking about the same people! I’ve just finished reading The Names by Don DeLillo, Permission by S.D. Chrostowska, Polyamorous Love Song by Jacob Wren, The Trouble with Brunch by Shawn Micallef, I Love Dick by Chris Kraus, another translation of The Odyssey, and a very small book/story by Zadie Smith, The Embassy of Cambodia. Oh, I also read some more of Zsuzsi Gartner and This Is How You Lose Her by Junot Diaz. Earlier this season I read Sin Eater by Angela Hibbs, New Tab by Guillaume Morissette, The Counting House by Sandra Ridley, and Slack Action by Jeffery Donaldson. Some Buddhist/meditation books: Wherever You Go, There You Are by Jon Kabat-Zinn and Buddhism Plain and Simple by Steve Hagen. I’m starting up Artful by Ali Smith and All the Rage by A.L. Kennedy. Then I’m reading Everyone Is C02 by David Brock and David Foster Wallace Ruined My Suicide by D. D. Miller. I really really wanna read William T. Vollmann’s new book. Maybe I’ll ask for it for Christmas.

The summer issue of U of T Magazine says the creative writing program is producing the country’s next generation of literary giants. You’re a graduate of the program; can you speak of your experience while at U of T?

I had a pretty good experience. Good teachers. I made lasting friendships. It gave me time to write, funded my ridiculous hours, and gave me a fast-forward route to teaching, which became a sort of profession for me for the next few years. It also showed me that I don’t ever want to pursue a PhD.

On the other hand, it’s expensive, and not helpful for employment outside of teaching or academia. The situation there is not the same as it used to be, naturally, so I can’t speak to its current incarnation (I graduated in 2010, so contact some current students or alumni to get a sense of the new regime). I can’t recommend it unless I know the disposition of the applicant. And while I appreciate the sentiments expressed in that article, and I admire the author, I don’t believe my creative writing program is “producing” any sort of writing, and I sincerely don’t believe it’s producing “the country’s next generation of literary giants.” This is jolly propaganda, to believe it’s anything like a “LIT GIANT” sausage maker. If you can “produce” a “literary giant” in a formulaic and reliable way, you are wrenching every last droplet of art from that writer’s work. This says something about what we Canadians imagine our new “literary giants” to be: colossal golems. A “produced” writer is a shit writer.

Also, just as many graduates of the program who go on to publish books and contribute to our literary culture also stop publishing and disappear. It’s too young of a program to weigh against time with any meaningful criteria.

Tell us about your role at The Puritan and what you look for in putting that online literary journal together.

I am co-founding editor of The Puritan. I do a lot of things: I manage submissions, make sure things are read on time, manage the editing process, correspond with authors, cut cheques, edit work in substantive ways, format and publish online, manipulate software and blogs, have meetings, apply for funding, hold events, work on advertising, collaborate with editors and other staff, and on and on. We are looking for quality writing—the best of what we can find. We’re especially interested, these days, in non-fiction: reviews, interviews, essays, and non-fiction that busts out of prescriptive moulds, the restrictions of print. Other voices, disparate views, interesting perspectives. We want to build the magazine into a premier space for critical thought. Because this is done part-time, without payment, and with volunteer staff, you can imagine it taking time. At best: a little engine that could. At worst, a midnight meat train, or maybe a bat outta hell.